Red Tide Beaches in Florida – What You Need to Know

If there’s one thing that the Sunshine State has plenty of, it’s an endless supply of sea, sun, and sand. Florida is one of the country’s leading holiday destinations, and every year millions of tourists flock to its sandy shores in search of a perfect getaway.

However, one thing that can spoil your summer getaway is the red tide that often affects Florida’s beaches.

If you’re planning a trip to Florida, it’s important to be aware of the red tide situation before you go.

What is a red tide?

A red tide is a harmful form of algal bloom. Algal blooms are a natural phenomenon caused when microscopic algae in the water bloom in large numbers. These algae often produce toxins that can be harmful to people and animals.

The Florida red tide is an algal bloom caused specifically by microscopic single-celled algae called Karenia brevis. When the tide is red, it means that there is a high concentration of these toxins in the water.

What causes a red tide to form?

An algal bloom occurs when the conditions are just right for the algae to multiply quickly. While these blooms are a naturally occurring phenomenon, human activity can make them worse, primarily through nutrient pollution.

Nutrient pollution is any form of pollution that contains unusually high levels of nutrients, such as nitrogen and phosphorus. These nutrients can come from sewage, animal waste, fertilizers, and even stormwater runoff. When these nutrients enter the water, they act as food for the algae to reproduce quickly.

This is why the best way to prevent red tide is to reduce nutrient pollution in rivers and other waterways.

Combining nutrient pollution with high levels of sunlight and slow-moving water creates the perfect conditions for algae bloom to thrive.

This is why the red tide forms in the Gulf of Mexico, where the water is typically warm, sunny, and sheltered from ocean currents that could help disperse the bloom.

What health effects does the red tide have on humans?

Red tide can cause a number of respiratory problems for people who are exposed to it.

The toxins released by the algae can cause coughing, sneezing, and teary eyes, potentially even leading to difficulty breathing. People with asthma or other respiratory conditions are especially at risk.

The toxins can also cause severe skin irritation and gastrointestinal distress. In severe cases, high toxin levels can trigger an allergic reaction.

That’s why during a red tide event, it’s important to avoid swimming in affected areas and to keep your skin and eyes covered if you are exposed to the bloom.

As the waves crash on the beach, the toxins from the algae can be aerosolized and carried by air away from the beaches. This means that you can also be affected by the red tide if you are near the shore and the wind is blowing towards you.

What effects does the red tide have on the environment?

The Florida red tide can have devastating effects on marine life.

The algae have a high concentration of toxins, killing fish, birds, turtles, dolphins, manatees, and other ocean creatures. This is why during a red tide, it is common to see dead fish and other animals on the beach.

In addition to harming marine life and causing respiratory problems, the red tide also has a devastating impact on the economy. The bloom often causes beaches to close, which means that tourists stop visiting and businesses lose money. The red tide also causes extensive financial damage to the state’s fishing industry.

Is it safe to eat fish and shellfish during a red tide?

For commercially caught shellfish, the Florida Department of Agriculture and Consumer Services monitors the quality of the food and checks for red tide toxins. Shellfish sold in the area will often not be harvested locally, and if it is, it will have been tested for algal toxins.

It is not recommended to harvest your own shellfish during a red tide bloom. Shellfish are filter feeders, which means they can concentrate toxins in their tissues. During a red tide, it is not safe to eat shellfish that have been collected from affected areas. Cooking and freezing also do not destroy the algal toxins, so this doesn’t make shellfish any safer.

Fish does not absorb the toxins into their flesh, which means that they should be safe to eat during a red tide. However, fish that show signs of red tide poisoning, such as gasping for air or floating upside down, should not be eaten as we can’t be sure of any other underlying problems they may have.

Which beaches are affected by the red tide, and when does the bloom dissipate?

If a beach is affected by red tide, swimming, fishing, and walking on the beach should be avoided. The bloom will dissipate when the wind and waves break up the algae cells and disperse them. This can take a few days to a few weeks. Some years, the red tide has even taken months to dissipate.

Red tide blooms can affect any beach in Florida, but they are most common on the state’s west coast, where the water is warmer and more slow-moving. The bloom usually starts in late summer or early fall, when water temperatures are highest and can last until spring.

Can people visit Florida beaches during a red tide bloom, or is it better to avoid them altogether?

If you do happen to be in Florida during a red tide, it’s important to take some precautions, but don’t let that spoil your holiday.

The best way to protect yourself from the red tide is to check the beach conditions before you go. They can be predicted by monitoring the water currents and wind conditions in the area, so check out the beach reports before you decide where to spend the day.

And remember that if the beaches are closed, there are many other activities to enjoy, such as visiting the state’s many theme parks, museums, and zoos. 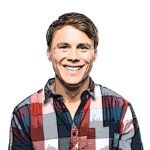 Sam is the founder of popularflorida.kinsta.cloud and is a native of Florida. Sam loves the Caribbean with all his heart and wants to share it with everyone he can. He has been traveling in the Caribbean since he was just 18 months old and has seen most of its beautiful beaches and turquoise waters.